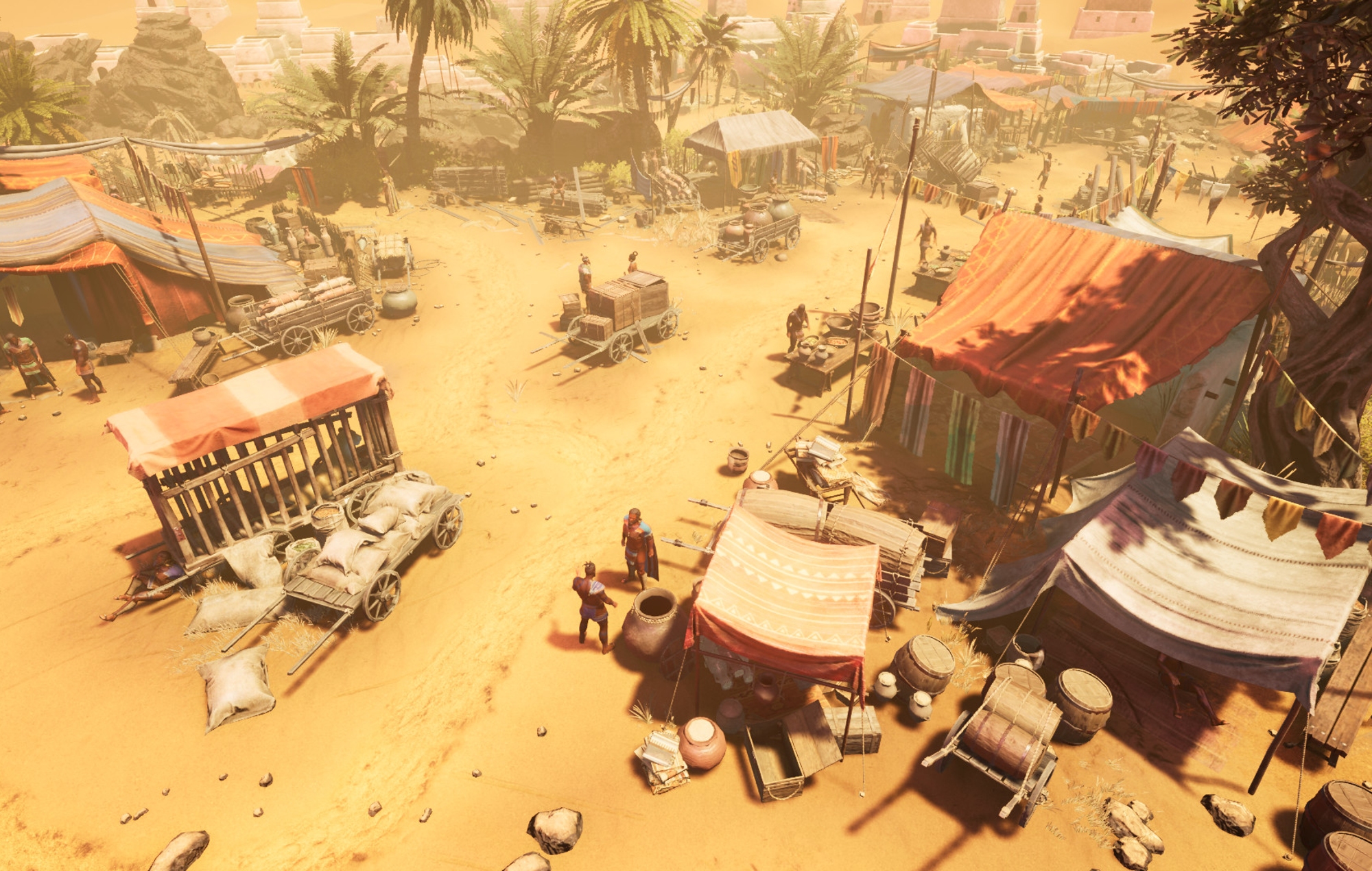 OWith all the weird fascination we still have with gladiatorial combat, it’s easy to overlook the most mundane forms of entertainment in ancient Rome. “The talent of Agathinus, the master juggler, is overwhelming,” wrote the poet Martial. “With quick limbs he throws the shield in the air and catches it on his foot, on his back, on his head and on his fingertips.” Expeditions: Rome, the latest entry in Logic Artists’ Expeditions The CRPG series deserves similar praise. It’s a sprawling, ambitious RPG that deftly keeps multiple genres in motion, and does so with focus and grace. I quickly found myself a captive audience.

Role-playing, tactics, and grand strategy all play their part here. While these different layers aren’t necessarily equally interesting or developed, their presence and alternating demand for attention create a compelling illusion of a grand, urgent, and complicated epic. At ground level, you’ll engage in skirmishes, subterfuge, and politics. You can send five elite agents to sneak into a warehouse and secure a tactical document, only to play the consequences of this new advantage on tens of thousands of soldiers. Pacifying a region after weeks of conquest may involve a long fight with dozens of fighters, or it may mean winning a battle of wits with a disgruntled senator. Some of the action may be abstract but, more importantly, it all happens on screen.

The result is a huge sense of scale that might feel impersonal in a game that hasn’t also taken the time and effort to develop its core cast. But everything you’d expect from a character-driven RPG is here, from romantic subplots to comprehensive ways to solve unique quests to certain personality choices. Aside from a few gameplay concessions, your party isn’t made up of immortal fantasy heroes. From liberated gladiators to aging athletes, Expeditions: Rome allows its cast to be private, flawed and mean-spirited, while confronting their personal journeys with the history and politics of the time. “Women in Roman society didn’t have first names,” the character designer told me as I chose my protagonist. The consequences of this simple choice, from the outset, turned out to be far greater.

I’m not passionate enough to talk about how many liberties the game takes with the actual story, but the sense of passion and attention to detail is still palpable. Sure, otherwise natural dialogue can sometimes feel like it’s straying into a history lesson, but when a setting is purely historical anyway, it’s understandable as world-building. I’m still trying to pinpoint the last time I played an RPG without any fantasy or sci-fi elements, and I’m having a hard time. So it’s wonderful that Rome still manages to feel romantic and moving without those elements to fall back on.

A historical setting always offers its own challenges, of course. Go too far one way, you have Assassin’s Creed historical-style fanfiction that has you building nukes out of olive oil with Leonardo, or whatever. But don’t have any interaction with famous figures and events, and you run the risk of the player’s journey feeling insignificant. So while I’m not sure I’ve drawn the line to say, rescuing Cleopatra from a prison wagon – yes, it does happen – I’ve at least started to consider where that line is. Mileage, variation, etc.

Despite the variety and long periods of pure exploration and dialogue, Expeditions: Rome is still primarily a turn-based tactics game. This is where most of the critical action takes place, and it’s where you’ll most keenly feel the consequences of tactical choices and resource allocation made elsewhere. Your main party and the legionnaires you recruit to fill additional roles have classes, each receiving appropriate Roman military analogues. Princeps are tanks, Veles are DPS, Sagitari are archers, etc. But the abilities your battlegroup has access to change depending on their gear. Fittingly for the period, shields play a huge role in combat. Not everyone can equip them, but those who can have access to a secondary armor stat that negates arrows and absorbs damage until dealt – most effectively with spears.

Companion bonuses, morale, status effects, battlefield manipulation abilities, a secondary special resource called ‘focus’ used for different feats, and the ability to restore action points spent on completing enemies open up these fights considerably. It’s also a small thing, but I feel a trick that a lot of turn-based tactics games have missed since post-XCOM boom is how much of this game’s success was due to the fact that its violence was, in many ways, just as satisfying as an action game. All that to say, when one of your tiny Romans guts a tiny Greek with an even smaller sword here, it fucking sounds like that. Yes, I am having fun. Thanks for noticing.

So everything is nicely complex and satisfying, but Expeditions: RomeThe real thing is the gripping narrative setting it lends to what can sometimes be a static, hesitant genre. One of the first missions had me running between a bonfire and throwing light torches at boats. Later, a siege involving two different parties, subterfuge, frontal assault, and catapults, absolutely sells out. Rome loves, and I mean, absolutely swoons, letting you set things and people on fire. See a man? You can burn it. It can also burn you. Horrible and disfiguring burns for everyone.

This all looks very promising so far, so surely something must give? Navigating non-combat areas, especially climbing ladders, is a painful affair. You’ll see your whole group of five politely climbing a ladder at an icy pace, in single file, and courteously hanging out at the top waiting for everyone to have their turn. Then, more than likely, you’ll open the one chest you climbed for and repeat the whole trick backwards. While often visually impressive, there are rarely many side quests or optional distractions in these towns. Spending forever sabotaging from side to side, sometimes multiple times, isn’t great. And by “isn’t great” I mean, “I audibly yelled ‘That’s bullshit'” at my monitor more than once.

There’s also an occasional smattering of jank, though hardly commendable for an RPG of this size. A few forced reloads, a few instances where my characters forgot how to walk. The fight can sometimes turn into a farce when several characters’ morale breaks and they start running around screaming they don’t want to die, shoving friends with spears, etc. But above all, the navigation is fluid.

This morale, by the way, leads us into the strategy layer. Between locations, you’ll travel across a world map, keeping tabs on your food and water while solving random encounters. This part is great. Lots of variety, tons of beautiful writing, and lots of added texture to the journey. As your party travels, you can send your legion out to conquer, which the Romans greatly appreciated.

This is the element a little more glued. Battles boil down to strategic map-style overview, and your only real agency here is to employ Stratagems that affect certain stats in mostly uninteresting ways. I haven’t lost a battle yet, or even a single commander. I’ll freely admit that I still don’t understand what everything is doing here, though. It just might come to life on the hardest difficulty. As it stands, and as I mentioned, while this is all a bit on the thin side, the context it lends to the rest of the game makes it a worthwhile inclusion. Also, it kinda reminds me of Suikoden, so I’m an instant fan of it.

The strategy and tactical RPG layers meet via camp management. Here, you’ll upgrade by “spending” the locations your legion has captured on the strategic map, and assign Praetorians to do things like heal lingering wounds earned in battle or craft new tactical items. Like torches, so we can burn more men. This is also where you can boost morale so that fewer of your party members go hiding in the corner during combat. Again, nothing revolutionary. Again, it’s still nice and gives the overall feel of managing every aspect of your campaign.

All in all, I’m seriously impressed with Expeditions: Rome. Yes, it’s a bit janky. And yes, not all of its systems are so interesting. But there’s not much else where you can go from planning huge battles between thousands of people to sucking senators at a Bioware-style party scene. The game moves from personal good to grand good, and often, giving an important sense of forward momentum to the journey. As long as you’re happy to commit to the expedition for the long haul, I think you’ll find this one worthwhile.

A few minor inconveniences aside, Expeditions: Rome is an impressive, huge and thrilling CRPG. Massively ambitious in its combination of genres, and competent enough to massively work the variety in its favor.

Movie Review: BRAZEN (2022): A mediocre romance with a mysterious crime rushes to a forced end