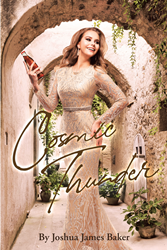 Joshua James Baker, a proud member of the Choctaw Nation of Oklahoma and a lover of video games, fantasy and science fiction, and human history and mythology, has completed his new book “Cosmic Thunder “: a thrilling historical fiction set in ancient Rome, following various historical and legendary figures such as Hervor, Flavius ​​Aetius and Justa Honoria.

On where his inspiration for this tale came from, Baker writes: “As I was growing up as a teenager in the 1990s, ‘The Legend of Zelda: A Link to the Past’ was for me the best video game of all time. The video game series itself is still being played by a lot of people right now. It’s an epic fantasy set in another world full of elves, monsters, and other fantastical creatures. Then in 1995, I discovered the television series ‘Hercules: The Legendary Voyages’, followed by its more brilliant spin-off, ‘Xena: Warrior Princess’. As a teenager in high school, I thought these two shows were the best on TV and I never missed an opportunity to catch a new episode.

“…While fantasy fiction itself had already influenced me, ‘Xena: Warrior Princess’ introduced me to the genre of historical fantasy. The show introduced me to human history, mythology and even folklore. I was interested in Greco-Roman history and mythology and my Celtic and Anglo-Saxon ancestors and their gods and goddesses. And having been raised as a Christian, a faith I had struggled with over the years, I even made time to study Jewish and Christian history. I collected books on angels, demons and even saints. In case you were curious, I can very well describe myself as an agnostic theist, although I have great respect for the Judeo-Christian God, thanks to my more religious and conservative parents.

Published by Page Publishing, Joshua James Baker’s epic tale will transport readers to a world they only thought they knew. Full of surprising twists and reimaginings of well-known characters, Baker’s tale will leave readers spellbound with every turn of the page as this assemblage of legends and history takes shape.

Readers who wish to experience this captivating work can purchase “Cosmic Thunder” in bookstores worldwide or online at Apple’s iTunes Store, Amazon, Google Play or Barnes and Noble.

For more information or media requests, contact Page Publishing at 866-315-2708.

Page Publishing is a traditional, full-service publishing house that handles all the complexities of publishing its authors’ books, including distribution to the world’s largest retail outlets and royalty generation. Page Publishing knows that authors should be free to create, and not bogged down with logistics like converting eBooks, setting up wholesale accounts, insurance, shipping, taxes, and more. Page’s accomplished writers and publishing professionals empower authors to leave those complex, time-consuming issues behind and focus on their passion: writing and creating. Learn more about http://www.pagepublishing.com.

Share the article on social networks or by e-mail:

K-dramas with the perfect blend of romance and action