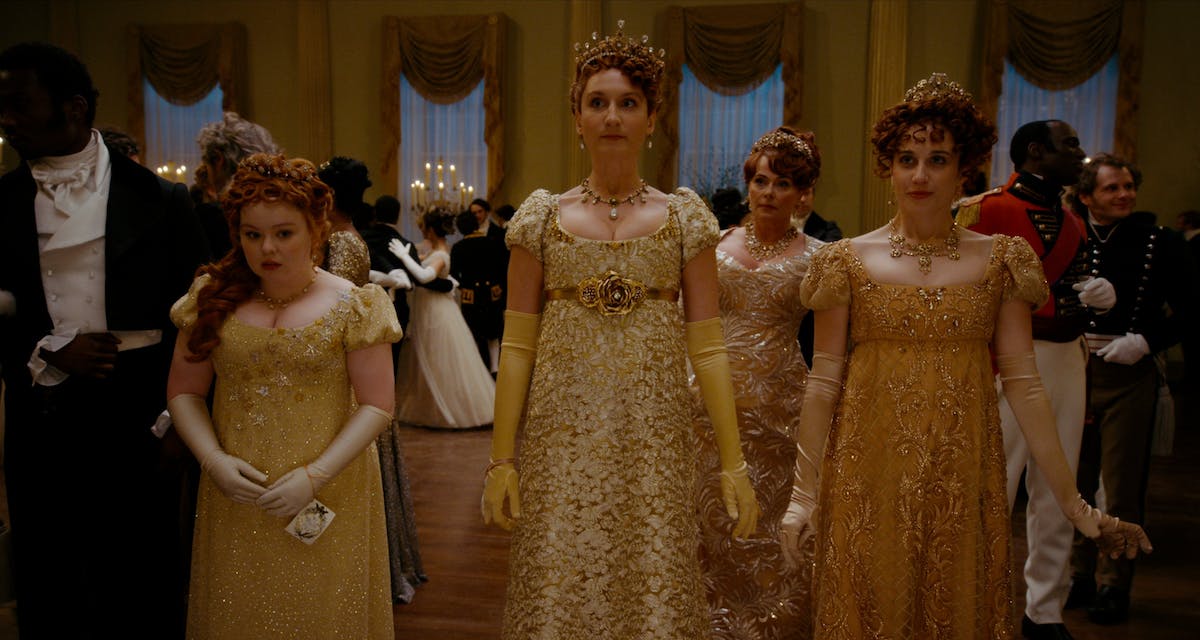 With the Second Season from ‘Bridgerton’ hitting Netflix, there’s a lot of internet buzz about the juicy new scandals – and the tension between Kate Sharma and Anthony Bridgerton. Another talking point has been the show’s costumes, which people seem to either love or hate.

Let me just say: this show is not for someone who wants to go after every costume inaccuracy. Nobody has that kind of time. And it’s clear, especially in the second season, that the show isn’t trying to be totally accurate.

Costume designer Ellen Mirojnick even said that she wanted to be faithful to the silhouettes and the blurred look of the time but also that she took liberties with the colors, the fabrics and certain styles worn.

I love the use of bright colors in the show, especially considering that period dramas often portray the fashions of the time as being dull in color.

The costumes are beautiful to look at and the different shades say a lot about the characters. For example, the Featheringtons’ bright and vibrant colors are meant to reflect the matriarch’s cheeky character, especially when it comes to showing off her single daughters.

On the other hand, members of the Bridgerton the family wears beautiful pastels which are meant to reflect their high status in society. Alongside the Featheringtons’ sometimes awkward outfit choices, the Bridgerton clan look classy and respectable.

Now that I’ve sung the show’s praises, I have to get into my harshest reviews.

There’s one major offender in this show whose costume choices I don’t understand: Lady Featherington. Her outfits and hairstyles are more reminiscent of the 50s and 60s than the Regency era.

While I don’t mind mixing more modern styles with older styles for creative and artistic purposes, I find Lady Featherington’s outfits to be a fashion crime.

First, her tight waist and pointed shoulders are about as opposite as the soft, flowing silhouettes of the Regency era. Lady Featherington spends the whole show hanging on to polite society despite the scandal, but wears clothes that stand out from the trends and the rest of the characters.

Since she is so concerned about her appearance and that of her family, it would make a lot more sense to see her wearing the latest trends. Not only are his costumes inaccurate to the character and the time, but they are also, in my humble opinion, just plain ugly.

One thing I can’t stand is the corset slander. We have this misconception, illustrated especially in movies, that corsets are torture machines that are always too tight and impossible to breathe.

One of the show’s first moments shows one of the Featherington sisters tying themselves tightly into a corset that wouldn’t be accurate for the time.

The tight lacing is meant to accentuate an hourglass figure, which is particularly out of place in the show given that the Regency era is famous for its loose silhouette – a fact that “Bridgerton” knows and sometimes displays accurately. So when women have tight corsets under their puffy dresses, it doesn’t really make sense.

In addition to this, corsets would always be worn with an undergarment like a shirt underneath which would stop chafing. It’s no wonder many actresses complain about wearing corsets when this step is almost always skipped. Of course, if you wear a corset the wrong way, you won’t feel good.

Actress Simone Ashley, who played Kate in season two, said she couldn’t eat in the corset and was in extreme pain, nearly tearing her shoulder.

When you consider the fact that women of the past wore corsets all the time and poorer women worked there and ran households there, it’s strange that we make them so restrictive when we recreate them.

I think most of the misconceptions about corsets come from actresses wearing ill-fitting corsets, which shouldn’t be talking about corsetry as a whole.

Honestly, I don’t mind clients taking creative liberties with precision and the styles of the time. But I think they have to be true to the basic trends, silhouettes and attitudes of the times. “Bridgerton” missed the mark in a few areas but succeeded in others.

I must also commend the “Bridgerton” costume department for the awesome job they have undertaken. Mirojnick apparently had 5,000 costumes made for the first season, an impressive feat — and one of the reasons the “Bridgerton” world feels so rich.

Look, “Bridgerton” isn’t supposed to have completely true-to-story costumes. They’ve clearly settled into a fantasy world, but I’ll admit I found some inaccuracies to go a little overboard.

But if you want to watch a Regency-era romance with near-perfect costumes, watch the 2020 version of “Emma.” And if you want to embark on a historic, costume-true show about scandal, romance and strict British society, then check out “Downton Abbey.”

But “Bridgerton” isn’t about that. It took me a few episodes to figure this out and fully accept the show’s costumes for what they were: flawed and inaccurate but beautiful and richly detailed pieces of storytelling.