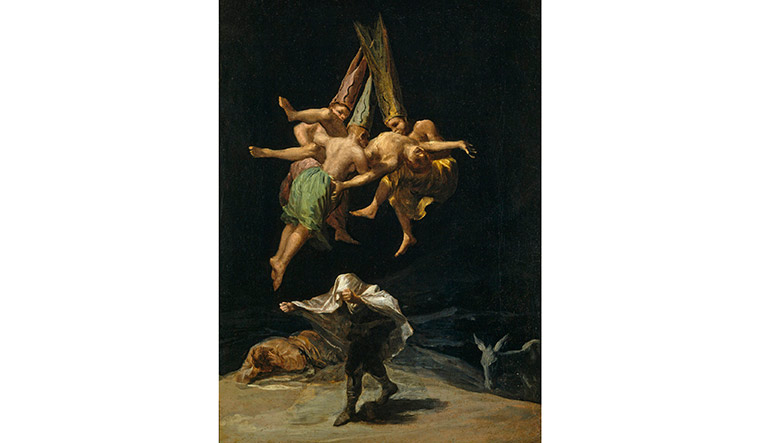 Popular art themes point to the direction in which a Covid-weary world is heading. It is not that art imitates life or that life imitates art. It’s just that artists have a different perspective and sensibility than journalists, politicians, and policymakers swirling in the throes of rapid developments. The message from the art world is that 2022 will be a year of warriors and women, faces, fantasy and feelings. It is both new and to be renewed.

Last year we lived in bubbles. But European art throbbed with fantasy and realism, remembering and representing life as we knew or imagined it. The exhibits were big on fantasy, which isn’t surprising as people easily slip into the imaginary amid the loneliness induced by the pandemic. In Basel, the exhibition on the Spanish artist Francisco Goya (1746-1828) was a powerful magnet. Goya’s saints and sinners, ghouls and witches inhabit realms where reality and fantasy merge. His genius was to portray the drama that unfolds when reason winds its way into irrationality.

Alice in Wonderland embodied at the Victoria and Albert Museum in London with endangered rabbits and psychedelic tea parties. Overwhelmed by the changes that surround her, Alice asks herself “Who am I?” “

Figurative painting reigned over the year. Freudian analysis suggests that audiences thirst to connect with faces: different, diverse, dramatic, or dull. It didn’t matter, as long as they were human. People flocked to view the portrait paintings, absorbing the expressions portrayed in exquisite detail – the dismissive Duchess, the smirking lieutenant, the cunning merchant.

The health of the planet was harassing the conscience of the people. The Nobel Prize for Painting, the Praemium Imperiale, was awarded to rainforest photographer SebastiÃ£o Salgado for his stunning monochrome images in silky black, blinding white and dark gray to forcefully convey human misery amidst a ravaged environment.

Exhibition trends suggest that the art world and society have not entered the kalyug, but the shakti yug. At the Tate Gallery, eight of nine solo presentations by living artists were by women. Another showcased the works of female artists who succeeded in invading the male-dominated realm of 19th century art. A Swiss exhibition features female artists who capture the female experience through nude portraits of women with pregnant bellies and sagging breasts. Through their imperturbable portraits, these female artists subvert the stereotypical male representation of the female form as seductive, voluptuous, mysterious or enduring.

In addition to battles between the sexes, cultural and political wars have invaded the sacred grounds of museums like never before. Slavery, racism and identity building in exile are illustrated by rage and resentment. Critics have trumpeted the arrival of a new star in the art firmament, painter Michael Armitage, 37. They praised its “sumptuous surfaces, luminous colors and exhilarating brushstrokes”. Beneath the visual feast are grim portraits of current and post-colonial conflicts that challenge historical assumptions.

Between the closings, several beautiful, quaint and controversial museums have opened or reopened across Europe to showcase human genius. The 13-story Munch Museum dedicated to Norwegian artist Edvard Munch, considered the father of modern art, has opened in the spectacular setting of the Oslo Fjord. Paris has imagined the renovated, clever and quirky Carnavalet Museum with old signs and miniature ivory guillotines.

In summer, the renovated Casa Balla opened in Rome, colorful and futuristic, crystallizing the human experience from endurance to exuberance. Italian artist Giacomo Balla lived and worked here through fascism and war, a reminder that calamities recede in history, but life and art endure. Despite pandemics, mass extinctions, wars and other catastrophic scenarios, our world with all its quirks and beauty, paradoxes and flaws, continues to turn.

Pratap is an author and journalist.