The last times gave birth innovative metric that measure pitcher quality, independent of traditional results like K% or BB%. Probably the most important of these are Pitching+, Stuff+, Location+ and Command+, all published by Max Bay and Eno Sarris at The Athletic (I want to thank Eno for his encouragement on this article, although any errors and unwise methodological choices are 100% mine).

Pitching+ is an overall metric derived from a combination of Stuff+, which measures the quality of a pitcher’s stuff based on the physical characteristics of their pitches, and Location+, which measures the value of a pitch based on its location at the marble. Additionally, Command+ measures the location of a pitcher’s throws relative to their intended location. You can find these measurements for 200 starting pitchers in Eno’s recently released ranks for 2022 (see also more on Eno’s methodology here and here).

This article incorporates Stuff+ and Command+ into a more traditional pitching projection and highlights some resulting movers and shakers for fantasy managers to target (sufficient historical data on Location+ and Pitching+ is not yet available to incorporate into a projection) .

Editor’s note: The RotoBaller Challenge is back for 2022, powered by our friends at Fantrax! Join a free fantasy baseball league today and compete against RotoBaller writers and readers for a grand prize of $500 cash to the top winner. All new Fantrax users are also automatically entered to win an official Wander Franco signed MLB jersey!

First, the graph below establishes the predictive validity of Pitching+. It shows that Pitching+ is on par with the Big Three projection systems in predicting ERA one season into the future, and superior to SIERA and xFIP.

Before preparing a projection model, and because a little external validation never hurt anyone, this article first examines the predictive validity of Stuff+, a key theoretical construct related to Pitching+, and Command+. Table 1 shows the correlation between the first half of 2021 Stuff+ and Command+ and various results in the second half of 2021 (data is limited, so the “first half” extends from the start of the season to July 19and; the “second half” takes place from July 23rd until the end of the season).

Stuff+ of the first half has a strong correlation with K% of the second half – almost as strong as K% has with itself. Impressively, Stuff+ also correlates more strongly with K%-BB%, ERA-, and FIP- in the second half than the metrics do with their first-half counterparts. The first half’s +order correlates with the second half’s BB% in the expected direction, but the strength of the correlation significantly lags the BB% correlation with itself. Following, Table 2 shows the root mean squared error (RMSE, a measure of typical error when predicting a metric, lower is better) when various first-half metrics are used to predict second-half ERA- and xFIP- semester. 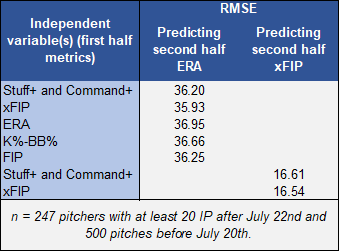 Having established the predictive validity of Stuff+, and to a lesser extent Command+, this article now turns to their integration into traditional pitch projections. Since Stuff+ is highly correlated with K% and uncorrelated with BB%, it makes sense to incorporate Stuff+ into a projection model for K%. By the same logic, it makes sense to incorporate Command+ into a projection model for BB%. Table 3 shows the results of various models of K% and BB%.

Model one only captures regressed K% (first half 2021 K% adding 15 rounds of regression to the mean, a traditional forecasting approach), while model two also adds Stuff+ to show improvement. Model three captures only regressed BB% (first half BB% plus 30 IP regression to mean), while model four also adds Command+. One could also build models to predict ERA, but this may provide more information to model more reliable metrics like K% and BB% rather than a high variance metric like ERA. 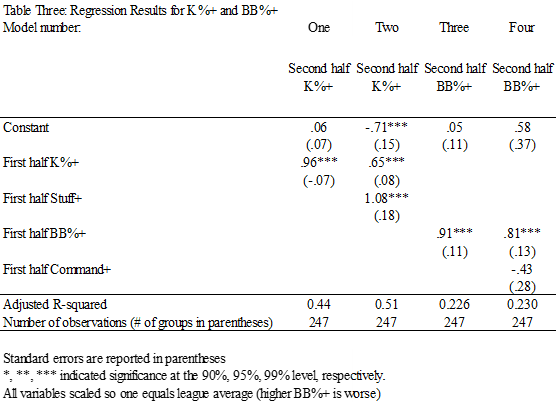 This could perhaps be explained by the fact that they are two related parameters which, in a certain sense, measure a pitcher’s ability to reach his points. If the predictive validity of Pitching+ is any indication (Figure 1), Location+ would likely be a big improvement over Command+ in BB% modeling, and incorporating Pitching+ into outcome models will likely bring additional gains – both are areas for future research.

Close, Table 4 shows the pitchers whose throws change the most (in terms of K% thrown minus BB% thrown, an important measure of pitcher skill) when incorporating Stuff+ and Command+ into their throw. For comparison, it also shows a traditional K% minus BB% projection that doesn’t incorporate Stuff+ and Command+.

These projections are based on 2021 data only and add only a little regression to the average (30 PI for BB%, 15 PI for K%). Additionally, the team at The Athletic have hinted that they will likely release their own projections at some point; be sure to follow their important work.

Like what you see? Download our free fantasy baseball app to iPhone and android which includes 24/7 player information, injury alerts, sleepers, outlook and more. 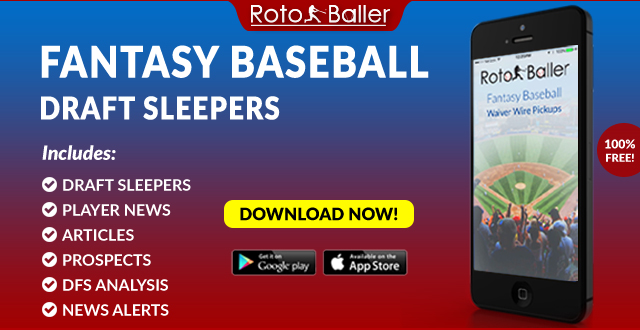