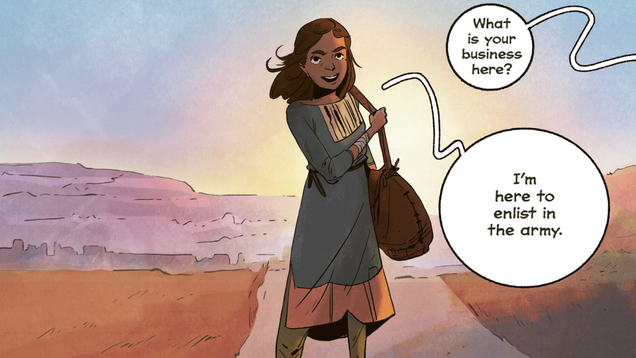 Although their names may not yet be familiar to many comic book readers, Nadia Shammas and Sara Alfageeh probably won’t be for long. Shammas has contributed to books like Wonder Woman Black & Gold #1 and wonder women #1, and Alfageeh’s art has been featured in a Google Doodle and the TTRPG (tabletop role-playing game) platform another multiverse, in addition to his comic book work. Together they form an even more impressive powerhouse of talent and intent. Readers got a taste of their teamwork in last year’s Free Comic Book Day issue of Avatar: The Last Airbender. But new book Squire is the main course: a feast for the eyes.

Squire is the story of Aiza, a girl who suffers not only from her parents’ attention, but also from the limitations of a complex, multi-layered social structure that rigidly defines her world. Presented with an opportunity to rise from beneath the poverty, food scarcity, and bigotry that shaped her young life, she enlists in the army to train to become a squire, with the ultimate goal of becoming a knight.

With knighthood comes money, fame and, most importantly, citizenship – a classification that was denied to Aiza and his family, and a cornerstone of the hatred and strife they faced. As Squire unfolds, the story that Aiza and her fellow trainees have been told all their lives about the empire they live in and the people who live there, begins to unravel, as does Aiza’s faith in her own decisions. .

This might sound familiar to fans of young adult fantasy novels, especially those aimed at girls: there are echoes of books like Tamora Pierce’s. The Song Of The Lioness Garth Nix series Abhorsen books, or Dianna Wynne Jones Dalemark Quartet. Aiza is the kind of protagonist who will leave a mark on readers, and Squire should stand the test of time better than many books, thanks to a neat plot and very clear messages about assimilation, colonialism and how war shapes the world. Although Aiza initially sees the military as her means to fight and escape the bigotry and oppression she and her community have faced, she comes to see that this group is actually a tool for reinforce the control that a powerful few exercise over the whole empire.

The most striking thing about Squire at first glance, it’s how grounded it feels in a very real sense of place. The teenagers are drawn as such, goofy and dramatic in turns, leaving room for physical humor as well as carefully executed fight scenes. The art is rich in shapes and colors, all pointing to different Arab cultures and identities; Alfageeh is painstakingly intentional about how the characters are dressed and what weapons they wield.

But it’s the backgrounds that really sing, especially the architectural details. Other books and other artists rarely place so much weight on things like tiles and door shapes; Alfageeh brings them all to life, understanding that everything from saddles to column shapes lend weight and weight to the story, making it – and the stakes – real.

Squire is not an exact account of Arab and Middle Eastern history, but it is very clearly influenced by the complex intertwining ethnic and political powers and the centuries of cultural exchange, erasure and violence that have shaped this part of the world. Alfageeh and Shammas are open that their experiences as Arab-Americans who loved fantasy and comic books shaped their need to make this book, and that need benefits everyone who reads this book. The cast of characters subverts expectations and defies easy explanations, offering hope but no easy solutions: Squire trusts the reader to engage with complicated ideas with understanding and generosity, to recognize that hard work may not pay off exactly the way we want. It’s a graceful book with a lot to offer, including excitement over the promise of seeing what Alfageeh and Shammas do next.