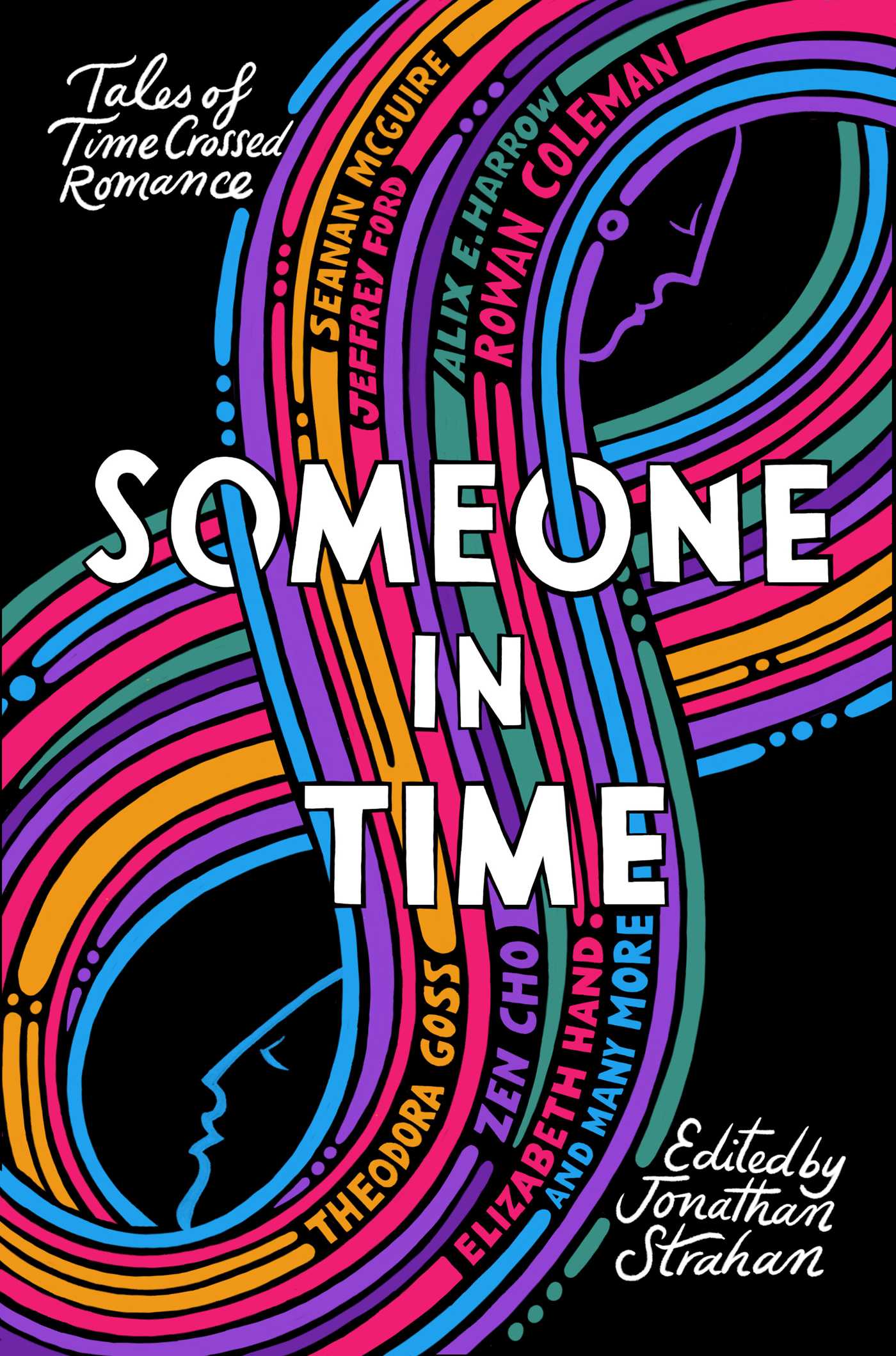 In his introduction to Someone in Time: Love Stories Through Time, Jonathan Strahan (who is both the co-host of my podcast and the reviews editor for this magazine) echoes an observation that should go without saying, but is often overlooked by readers and writers who get carried away by the theoretical mechanics of time travel – namely that it is simply “an excellent narrative device”. Fortunately, almost all of its contributors already know this. Unlike other classic SF notions, time travel was never really based on projections of existing technology or social trends, and it was popular long before Wells got into science fiction. in 1895 with The time machine – think of Dickens earlier A Christmas Carol or Twain A Connecticut Yankee at the Court of King Arthur. Perhaps that’s one of the reasons SF never fully embraced the idea, and why writers from Robert Nathan to Audrey Niffenegger have found it just as useful for fantasy romance as they are for speculation. Nathan’s 1940 novel Portrait of Jenny probably established the wistful, sentimental tone of time travel or time-slip romance, later picked up by Jack Finney and Richard Matheson and most directly reflected here in Rowan Coleman’s “Romance: Historical,” a charming haunted bookstore tale with a classic blurred area end. But as other picks point out, love stories can easily inform many SFF types. It may even be that some of the great SF romances were overlooked because they seemed overshadowed by the more traditional SF themes of storytelling – think Mandella and Potter in Joe Haldeman. The Eternal War, for example, separated by relativistic time shifts. Among Strahan’s SF selections, however, it’s those more traditional elements that remain in the background – a Mars colony in Sameem Siddiqui’s “Timed Obsolescence,” for example, or an ancient Earth-Moon war in “Letter to Merlin.” by Theodora Goss, which leads to a rather gloomy vision of the last days of humanity.

Goss’s story is one of many that make effective use of another aspect of temporal romance: the opportunity to explore various historical contexts (thus bringing another genre into play). Cast as a letter from Guinevere to Merlin, it begins with the not entirely novel idea that Merlin might have been a time traveler (as Guinevere is) but quickly opens with an almost mournful tale that transforms the Arthur/Guinevere tale in what has sometimes been called an entropic romance. In Carrie Vaughan’s “Dead Poets,” a poet and literary scholar hoping to meet Sappho instead lands in Tudor England with the poet Thomas Wyatt, credited with introducing the sonnet to England but now mourning the execution of Anne Boleyn, who may have been her lover. In a similar misfire, the protagonist of Seanan McGuire’s “First Aid,” who has made elaborate preparations to visit Elizabethan England, finds himself instead at a Renaissance fair in 1996 (the story is not as comical as it sounds, once we know the personal motivations of the protagonist). Josephine, the time traveler in Nina Allan’s moving ‘Les Lichens’, meets an aspiring scientist named Helen in 18th century England, seeking her help in unearthing what may be a long-buried alien spacecraft and developing a relationship that resonates through many subsequent decades. – although that can’t quite stop Helen from dying in the dark. Sarah Gailey’s “I Remember Satellites” essentially reimagines the story of Wallace Simpson and Edward VIII from the perspective of a time traveler whose mission is to prevent fascist sympathizer Prince Henry from ascending to the throne, even though his true love is a time travel companion. And the 25th century time traveler in Lavanya Lakshminarayan’s “Bergamot and Vetive,” one of the most sensual tales, travels back to the little-known Indus Valley Civilization in 2501 BCE, initially to study the conserving water but inevitably getting involved in romance.

It’s not too surprising that, in romance-focused tales, the mechanics of time travel are barely touched upon. The most traditional approach to SF appears in one of the anthology’s two reprints, Ellen Klages’ now classic “Time Gypsy,” which combines a forbidden gay romance in 1950s San Francisco with a revenge ingenious handed down to an arrogant scientist who claimed credit for the work of another physicist. But in Alix E. Harrow’s “Roadside Attraction,” the time portal is simply a sandstone pillar set in a failed theme park, where a recently abandoned visitor searches for his passion in the past, only to find it closer to home. (a version of a fairly common romantic plot). Some stories invoke supernatural or even religious concepts; Zen Cho’s tale “The Past Life Reconstruction Service” features tours of past incarnations, though the middle-aged protagonist finds that even in past lives he can’t quite escape his boyfriend’s versions. much younger. The idea of ​​the bardo, or “that timeless place between now and what’s to come,” features prominently in Margo Lanagan’s “Place of All Souls,” and she makes brilliant use of it. The shortest and saddest selection, “Unabashed, or: Jackson, Whose Cowardice Tore a Hole in the Chronoverse” by Sam J. Miller, is largely a meditation on the possible alternate lives lost after the boyfriend’s death. of the narrator following a homophobic beating.

From a purely literary point of view, someone in time is simply an outstanding collection, with none of the contributors phoning in the kind of easy time-warping jokes that were once a staple of pulp magazines. Almost every contributor is looking for a surprisingly original angle to approach romance and, rather refreshingly, more than half of those romances involve LGBTQIA+ relationships. Some of the tales are particularly notable simply for the grace of their prose. I’ve mentioned Nina Allan’s elegant ‘Lichens’ before, but Jeffrey Ford’s ‘The Golden Hour’, with its tragic time traveler trapped in a small town in a world a bit out of step with ours, is just as beautiful. what we come to expect from him. But the most adventurous experiments with the notion are two tales that derive considerable power from the very fragmentation reflected in their structure: Elizabeth Hand’s “Kronia” (the only other reprint), which imagines various iterations of a relationship dislodged by the September 11 attacks, and “The Difference Between Love and Time” by Catherine M. Valente, which is often very funny. Valente’s narrator tells a lifelong, and vividly non-linear story, with “the space/time continuum”, which takes on many personalities; the tale remarkably retains its intimate focus by returning to memories of vacations at a seedy Washington state resort. It may be the more unusual story here, but there is hardly any story in someone in time which could be described as “usual”. Sometimes a thematic anthology leaves you with the feeling that only the best contributors have risen to the challenge. Here, you get the impression that all contributors welcomed the opportunity, and they pretty much all delivered. The result, despite some sad results for the characters, looks downright celebratory.

Gary K. Wolfe is Emeritus Professor of Humanities at Roosevelt University and a reviewer for Locus magazine since 1991. His reviews have been collected in Surveys (2006 BSFA Award; Hugo nominee), Bearings (Hugo candidate 2011), and Comments (2011), and his The evaporation of genres: essays on fantastic literature (Wesleyan) received the Locus Award in 2012. Previous books include The Known and the Unknown: The Iconography of Science Fiction (Eaton Prize, 1981), Harlan Ellison: On the Edge of Eternity (with Ellen Weil, 2002), and david lindsay (1982). For the Library of America, he edited American Science Fiction: Nine Classic 1950s Novels in 2012, with a similar set for the upcoming 1960s. He received the Pilgrim Award from the Science Fiction Research Association, the Distinguished Scholarship Award from the International Association for the Fantastic in the Arts, and a Special World Fantasy Award for criticism. His series of 24 lectures How Great Science Fiction Works appeared in The Great Courses in 2016. He received six Hugo nominations, two for his critical collections and four for The Coode Street Podcast, which he co-hosted with Jonathan Strahan for over 300 episodes. He lives in Chicago.

This review and others like it in the June 2022 issue of Venue.

While you are here, please take a moment to support Venue with a one-time or recurring donation. We rely on reader donations to keep the magazine and site running, and would like to keep the site paywall free, but WE NEED YOUR FINANCIAL SUPPORT pursue quality coverage of science fiction and fantasy.

©Locus Magazine. Copyrighted material may not be republished without permission from LSFF.

10 LOVE and Romance movies that make us gasp… – Designer Women